Jitneys!, or The Sharing Economy of 1915

Posted by Lisa W. - guest blogger on February 16, 2016
These days a regular person can use their personal car to make a few bucks (maybe even enough to live in San Francisco) by shuttling passengers around the city using Uber, Lyft or Sidecar. In turn, their passengers don't have to wait around for a taxi that might never come or get on a crowded bus that's standing room only. It's all part of the new "sharing economy." It may seem like a radical new idea, but San Francisco has seen this all before.


In late-1914, owners of small cars in Los Angeles began competing with the city's electric railway and a brand new bus system by taking passengers around the city. Passengers paid 5¢ - or a "jitney" - for a ride. Thus the cars, and eventually buses, became known as "jitneys".

The jitney craze soon took over other cities and San Francisco was no exception. By January 1915 there were already 1,000 jitneys operating in The City. By the time the Panama-Pacific International Exposition was in full-swing, there were 2,000 jitneys on the roads shuttling people to and from the fair. The jitney seemed like it would be a perfect match for San Francisco. Charlie Chaplin set his film "A Jitney Elopement" in San Francisco, highlighting Golden Gate Park and the Great Highway near the end of the movie. And the song "Father Is Driving A Jitney Bus" was published by Buell Music Co. of San Francisco. 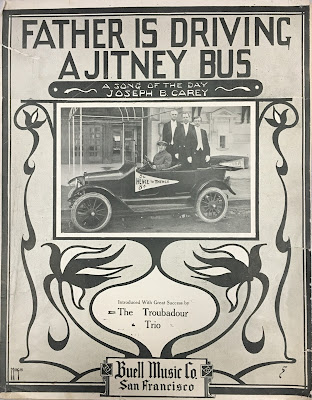 
O'Grady 'phoned to me
In great perplexity
That the times are getting harder ev'ry day
And said with moans and sighs
That he must economize,
Cut out the booze and throw his pipe away;

Now I want it understood,
That with me the times are good,
And the same is true with all the family,
If this should cause surprise
Just let me put you wise
And tell how Fortune came to smile on me:


Father is driving a Jitney bus from the station to the park,
And soon I know he'll be a millionaire,
The stove in the kitchen has been ignored,
Dear mother is renting a "Can't Afford" [*]
For a half a dime she'll take you anywhere;
Sister has left the department store to become a Jitney Queen,
Her little car is winning great renown;
O, the bank account is getting fat,
For Pa and Ma and sister Hat,
Since the Jitney bus has come to bless our town.

When Father whizzes by
You'll hear the people cry
"O, Mister Maxwell let us ride with you!"
They come from far and near
The Jitney bust to cheer
To trolley-car they bid a fond adieu;

Now it only cost five cents,
To ride from hence to thence,
So the merry little Jitneys roll along,
Then come an take a ride
With your sweetheart by your side
Strike up the band and sing the Jitney Song:


But by 1916, jitneys were coming under attack by the streetcar lines as well as the city's lawmakers. The Jitney Bus Ordinance, passed in August 1916, limited the number of jitney drivers in San Francisco to 700 and forbade jitneys on Market Street from Fremont to 6th Street between the hours of 10:30 a.m. and 4 p.m. Outraged, the Jitney Operators' Union tried to fight the new law with an amendment on the November 1916 ballot, reminding voters "What the Jit Has Done For San Francisco" with quips such as "The jitneys have cut down strap-hanging" and "[Jitneys] Have made the automobile a servant of the plain people instead of a toy of the rich." But they couldn't save the jitneys. In January 1917, the Guardian Casualty and Guarantee Company declared that it would no longer insure jitneys for the Jitney Operators' Union. With the loss of insurance and the Market Street traffic ordinances, jitney drivership began to drop. In August of 1916, jitney licenses were down to 868, and in January of 1917, only 542 drivers were listed.

A few jitneys carried on in San Francisco through the years. The price was no longer a nickle, but the jitney was still deemed "the poor man's taxi." In 1968, most jitneys were on Mission Street and charged 20 cents to 22nd Street and 30 cents to the county line. Since 1997, there has been only one jitney operating in San Francisco. It takes passengers between Market and 4th Streets and Caltrain.

For more about jitneys, the San Francisco History Center on the 6th Floor of the Main Library has these items to study:


And from the Magazine and Newspaper department on the 5th Floor of the Main Library ask to see the Electric Railway Journal for the article "The Jitney-Bus Competition". Vol. 65, No. 7 (February 13, 1915.) [*This item is in storage and may require 24-hour notice.]