When most visitors to the San Francisco History Center ask for Milk, they mean the papers of Harvey Milk. (You can find a description of those, along with other Harvey Milk resources, in the post "Condensed Milk"). But a less-requested, more literal sort of milk--dairy milk--is also represented in our collections in the form of ephemera from Christopher Dairy Farms. As Andrea demonstrated last week in her post on book detritus, ephemera may be found in all sorts of places, even mayoral papers. 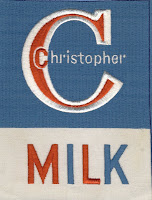 Former Mayor George Christopher, who served two terms as mayor of San Francisco from 1956-1964,  made his fortune as the entrepreneur of a small dairy business in the 1930s which grew to become Christopher Dairy Farms. Thus, amongst the more usual types of material to be found in mayoral papers, such as speeches and legislative files, one will also find milk cartons, uniform patches, and even a shopping cart placard.

Christopher was convicted in the 1940s of a misdemeanor for a milk price-fixing violation, a conviction which re-surfaced during his political campaigns. His San Francisco political life and legacy, however, far surpassed it.

Disclaimer: The appearance of Harvey Milk with Christopher Milk in no way reflects an endorsement of any kind; the association is purely linguistic.
archives ephemera San Francisco History Center