Did you know that not all of the tombstones from San Francisco cemeteries were moved to Colma with the bodies of those re-interred there? The tombstone was only preserved if descendants were willing to pay for its relocation. Tombstones that were left behind were used as part of several WPA projects including the sea walls at Aquatic Park and the Yacht Harbor in the Marina.

Photo: [Sea wall under construction at Yacht Harbor]1934 Nov. 25. Courtesy of the San Francisco Historical Photograph Collection, San Francisco Public Library.
Further inland, bits of tombstones were used to line the gutters at Buena Vista Park. Most of the stones used were turned so that the smooth side of the stone faced up, but if you look closely, you can find a few pieces with writing on them that hasn't completely worn away.

Photo: Bits of tombstones in the gutters at Buena Vista Park. (L. Weddle)
My personal favorite use of old SF tombstones was for the creation of the Wave Organ. With San Francisco's summer finally kicking into gear, now is a great time to check out the mysterious sounds from the ocean while appreciating the marble stones that make it up. (Tip: The Wave Organ works best at high tide!)

However, for those who like a more indoor experience, a few of these tombstones made their way up here on the 6th Floor of the Main Library. Come on up for a closer look at these markers, undertakers receipt and mortuary records!

For more about the relocation of San Francisco's dead to Colma, come to the One City One Book event: Documentary Films - Trina Lopez's A Second Final Rest: The History of San Francisco's Lost Cemeteries and Justin Schein's Gravediggers - Tuesday, September 29 at 6 p.m. Filmmaker Trina Lopez will appear in person for Q & A. 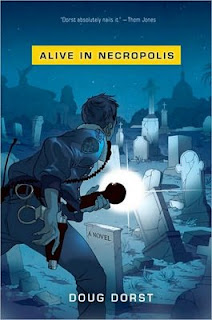 We're pretty used to cavorting with the local ghosts here in the San Francisco History Center, and we'll be sharing some insight into their lives in the upcoming months. In the meantime, get to know some of the Bay Area's more colorful (and now dead) characters highlighted in Doug Dorst's Alive in Necropolis by picking up a copy at your local library today. Check out One City One Book's events page for the fun and fascinating events throughout September and October!
cemeteries Colma exhibitions One City One Book San Francisco history San Francisco History Center
Lisa W. - guest blogger
I'm constantly amazed by what I find when searching for requested research materials.